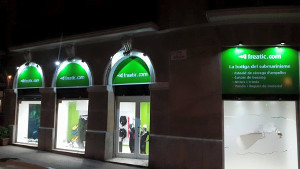 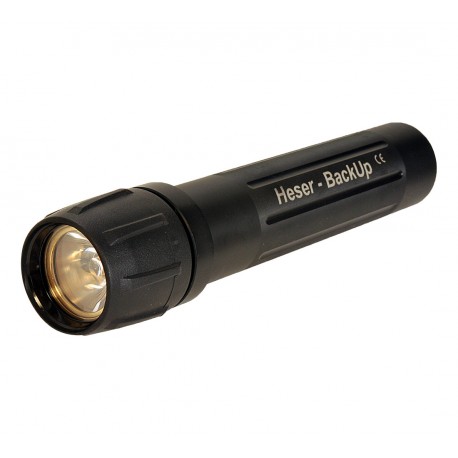 Through the use of extremely high output 4W LEDs, this lamp is much brighter compared to similarly sized halogen lamps, and has a longer burntime. Selected LED: These premium LEDs are selected by the LED manufacturer to have a light output from 300 lm for the same power input. These LED emitters are considerably brighter than the standard LED emitter and share the same burn times.

The focusing of the LED beam is tight enough to meet the needs of cave divers. This focusing was achieved through a specially manufactured reflector. Until now it was normal for 50% of the available light not to be focused by the reflector/lens combination. This unfocused light spreads out to the sides and doesn't do the cave diver any good. A tightly focused efficient light beam is also advantageous for normal open water diving. Because of this the Heser-Backup is also used as a main light for open water diving.

A large reflector can more efficiently focus the LEDs output than a small reflector. Many LED lamp manufacturers use a smaller, less efficient reflector/lens unit, thereby saving money. Heser does not.

The decision to eliminate controlling electronics provides the following advantages for use as a Backup light:

Heat produced by the LED is returned to the batteries

The lamp body is turned from a solid rod. The axial channels and roughened middle section make the lamp easy to hold with wet hands and gloves. The rubber hood on the lamp head is also non-slip.

The lamp is switched on by simply turning the lamphead. This joins the reflector to the heat-conducting battery tube which completes the circuit and also conducts heat to the batteries.

Usable with primary and rechargeable batteries

The lamp can be used with 3 Alkaline "C" Cells or with 3 NiMH rechargeable batteries. (If you use NiMH batteries, you should ask the battery manufacturer if a hydrogen catalyser is required. Use is NiMH batteries is, of course, at your own risk.) Due to the extremely long burn time compared to normal lamps, one set of alkaline batteries will probably last for a whole vacation's night dives. Therefore you don't need to provide the care needed to properly maintain a set of rechargeable batteries.